The Philadelphia Inquirer – Listen up, Philly’s storytellers have a lot to say 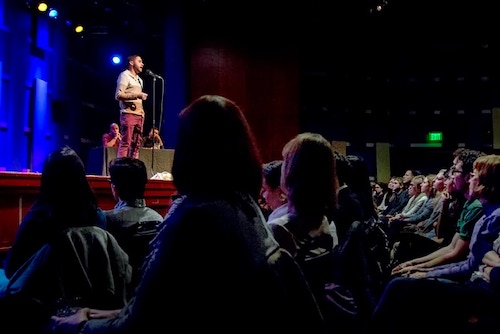 One speaker, one microphone, an attentive audience, and five or 10 uninterrupted minutes on stage.

For as long as humans have been telling stories, other humans have been tuning them out. It’s probably gotten worse in the smartphone era. Good listeners — and good reasons to listen — seem to be in short supply.

Or maybe you just need to know where to look.

“This is a city full of people who are enthusiastically interested in the lives of others,” says R. Eric Thomas, who has hosted monthly Moth StorySLAMs in Philly for the last five years.

Beyond the Moth’s events at World Café Live, the city’s other regular storytelling nights include the bimonthly Tell Me A Story series at Shot Tower Coffee and the monthly First Person Arts StorySlam, which touches down at various downtown venues. Some events, like Tell Me A Story, put their rosters together ahead of time. At the Moth and others, you put your name in a hat and cross your fingers. If it’s got “slam” in the title, that means it’s a competition, with the best storyteller usually determined by audience vote.

All of them promise true stories and minimal distractions. It’s just one speaker and one microphone. The audience is attentive; the only thing in their hands is a coffee or a beer. If you get up to tell a story, you will be heard for five or 10 uninterrupted minutes. That’s the value of a well-run storytelling night.

“It gives the stories presence and respect, and it’s pleasant to have your experiences valued in that way,” says Kelsey Stewart, who has told stories at several events throughout the city. “I particularly like when the audience is close and you can see and hear their responses. You get to feel connected to the people listening and it often sparks conversations after you get off stage.”

“I think people fear public speaking more than death,” says Nick Kupsey, a stand-up comedian who frequents the city’s storytelling nights. “That’s a shame. I love it. I’m much more afraid of crossing the street than I am telling a room full of strangers about my various fetishes or the time I maced my own genitalia.”

That’s the thing. These events are all about getting personal. The topics are all over the map: sexism, racism, blue-collar existentialism, embarrassing moments, everyday indignities, heartbreaks, bad dates, bike accidents, run-ins with celebrities — you name it.

“I find that a lot of my stories are colored by my experience as an immigrant,” says storyteller/comedian Ari Fishbein, who emigrated to the U.S. from Israel with his family when he was 7. At a Tell Me A Story event this past July, he recounted a fifth-grade trip to see a community theater production of Grease. “It was like seeing Star Wars without ever having heard about space,” he says. “Nothing that out-of-the-ordinary happened on the trip, but for a 10-year-old boy who had no idea about the culture of ’50s America — much less Grease as a musical — no part of it at all made sense to me.”

For some storytellers, the experience can be an adrenaline rush.

“Honestly? It’s like public speaking as an extreme sport. It is the skydiving of public speaking,” says Nimisha Ladva, the reigning Philadelphia MOTH Grand Slam champ. “Storytelling is really a way to build connection, not just between you as the performer and the audience, but between audience members themselves — to give them a shared experience that they can talk about and take with them out of the venue and into their lives.”

“I think, for the most part, people are over traditional Valentine’s celebrations,” says Troy Hendrickson, who hosts in the guise of Delco denizen Aunt Mary Pat. “We all have an ex story, so it’s really relatable.”

Most storytellers talk about the welcoming atmosphere at these events, but all of them recommend that rookies do their homework before stepping up to the microphone.

“Actually know what your story is before you get to the mic,” advises Randie Welles, another storyteller with stand-up comedy experience. “Don’t just have a vague idea, ramble, and then think that it’ll pull itself together naturally once you’re onstage.”

Thomas’ advice for the storytelling novices? “Well, I have to go with the words of my homey Emily Dickinson, who said ‘Tell the truth, but tell it slant.’ Life happens to you all the time. It is happening right now. The key to telling a story is simply deciding where something began, where it ended, and what it meant to you. And then opening your mouth and speaking. And at the end, say ‘thank you’ so people know when to clap.”

On some level we’re all storytellers. Ladva’s advice to the hesitant is: Go for it. “You are guaranteed to live to tell — which makes it even better than skydiving.”First Person Arts presents “The Ex Files,” an anti-Valentine’s Day StorySlam. Thursday, Feb. 14, 7 and 9:30 p.m. FringeArts, 140 N. Columbus Blvd. $14. my.firstpersonarts.org