The Philadelphia Inquirer – Comedian Maria Bamford has a Philly connection, but that’s not why she’s coming here

Her husband grew up on the Main Line, “but he always wants me to tell people that he rented,” Bamford says. 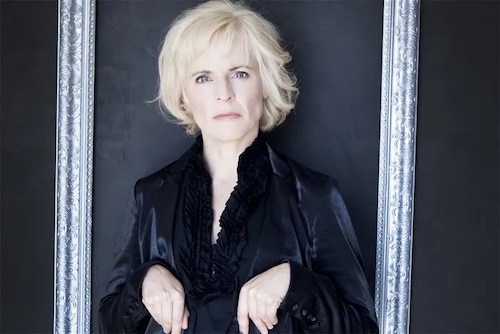 Comedian Maria Bamford is soon coming to perform in Philadelphia, but these days, trips to the City of Brotherly Love are more common for the stand-up star.

That’s because, in addition to starring in the critically acclaimed Netflix series Lady Dynamite, appearing on Arrested Development, and launching specials like the Special Special Special and Old Baby over the last few years, Bamford also got married.

His name is Scott Marvel Cassidy, a Main Line native and Pennsylvania Academy of  the Fine Arts graduate and painter. They’ve been married since 2015; their relationship started on OKCupid.

Bamford will be in  Philly on Sunday  to perform a stand-up set at the Fillmore as part of the 16th annual First Person Arts Festival. For Lady Dynamite fans, that’s two days after the second season of the show premieres on Netflix, on Friday.

Fans  know Bamford for her strikingly honest material relating to mental health. She’s opened up about her struggles with type-II bipolar and obsessive compulsive disorders. But, as she told us during a recent phone call, her material is moving away from mental health,  thanks to a regimen of medication that works for her.

We talked with Bamford about her new focus in stand-up, her connection to Philly, and what fans can expect from the new season of Lady Dynamite:

Your husband, Scott, is from the Philadelphia area. Have you been spending much time in Philly since you two started dating?

Yeah. We’ve been together for four years, and he has family in Lansdale. He grew up on the Main Line, but he always wants me to tell people that he rented. It wasn’t fancy. He went to the Pennsylvania Academy of the Fine Arts and was a scholarship student there. We spend a lot of time there, for sure.

Do you two have any plans for when you’re coming to town for the Fillmore show?

I’ll for sure be there for work. I always want to see Reading Terminal. I brought my parents to the Mummers Parade last year. A favorite museum of ours is right next to the White Dog Cafe, the [Institute of Contemporary Art]. Scott worked there for a while, and we hang out there a lot. But I’m not sure if Scott is coming because I scheduled things too close together. It’s his reunion around that time.

The Mummers are definitely an interesting choice, especially for someone who didn’t grow up with it. What did you make of it?

It’s like a weird Wizard of Oz thing, where you’re like, ‘Where does this lead?’ But I’m not much of a partier due to copious psychiatric meds that I am paying dearly for. Why pay more?

We’re getting you a couple of days after the new season of Lady Dynamite premieres. What can you tell fans about the upcoming episodes?

I can totally give away almost everything. No, let me see … We have lots of animals on the show. A llama, two raccoons, two pugs. No guinea pigs, but Scott, a Philadelphian, is in it. He plays the part of the guy who is playing the part of him. And then, of course, superstars! I’m the worst with names, which is probably why I never had a TV show before. I can never remember everybody’s names. I’m IMDBing my own show.

With Lady Dynamite, it’s an absurdist show, but it is also introspective and personal. How does working on the show compare to a stand-up set?

It’s exciting because I haven’t worked with people before, really. I’ve enjoyed stand-up because it is so independent. Doing a TV show is totally different. It’s a massive group of people, and, because I’m not a leader, really, I was more of ‘the team.’ There was another head writer, and they did a fantastic job of translating my voice into something that could be enjoyable to everybody.

Do you think you’ll go beyond a second season with the show?

I hope so. But that’s the thing in show business: You never know. That’s also the great thing about the arts: I’m always empowered to do whatever I want. Whether or not there’s a third season, I can still keep creating stuff. It’s amazing to have gotten this far. It’s an exciting experience, and it makes you feel like you’re working to the top of your abilities. It expands my brain.

For your Philly show, what can fans expect? Are you still focusing on mental health pretty strongly in your act?

It’s funny, because now that I am on a very good regimen of meds, I feel really good, so I don’t have as much mental health material coming out. So, I may be working myself out of a job, which is OK. I would rather be happy and be less of a cash cow than be a cash cow as a result of a mental health shtick. You’ve got to do the country folk album that nobody wanted.

A lot of comedians wouldn’t agree. The stock line is to be worried you won’t be able to write the same.

Oh, my god. There’s no way I could have written or performed the stuff I have about mental health unless I were stable. I just had to feel good enough to write. That’s my experience. Sometimes, it’s like, ‘I can’t see that punchline through my last bout of tears.’ It’s only been positive to be stable and be on medication for me. I know that’s not the same for everybody, but, for me.

Still, with projects like your GoFundMe benefiting the National Alliance for Mental Illness, mental health is very much on your radar.

As a creative person, I think I still feel strongly and want to be an advocate for health care because I’ve been super-lucky. When you’re a writer or comedian or artistic person, there’s definitely more acceptance. Even my manager, when I was unable to speak or talk, was like, ‘I have a couple clients who are bipolar. Just call me back when you’re feeling up to it.’ It’s no big deal. That is not the case in other industries.

Do you think your past material on mental health has helped to destigmatize mental illness in pop culture? Do you think it has had any impact?

For sure, it has for me. It’s been awesome for me to talk about it. To feel useful is good, too. It’s super-sad that our health care is so bad that the one place people can find education on social ills like mental illness is through television. That’s brutally depressing. But the thing of art is to connect us all. In that way, hopefully I’ve been useful. If not, who cares?