Felonious Munk has nothing to hide when it comes to the tumultuous ride that has been his life’s story. 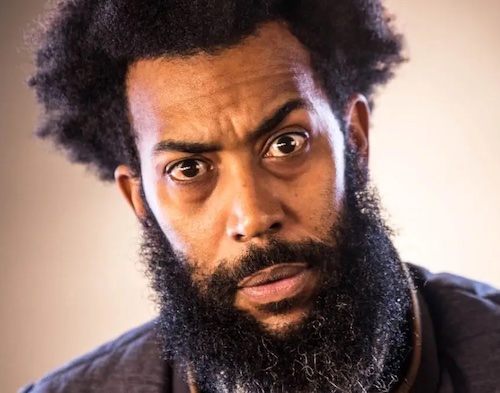 Not from anyone, especially his 13-year-old daughter just starting to understand who her dad was and through reformation, the influential man he became.

It’s not a rags to riches tale — at least not in the conventional sense, but instead a 40-plus years of memories riddled with a life of poverty, drugs, crime and subsequent imprisonment and the transformation into a widely successful comedian, devout activist and government critic and as of recent, vulnerable storyteller.

Munk, whose given name is Dennis Banks has spent the bulk of this month here in Philadelphia, the headliner of the 13-day First Person Arts Festival (Nov. 4-17). For the past two nights, Munk has took the stage at FringeArts and retold the story of his life solo as a part of a more intimate, yet somehow still satirical retelling. Friday night serves is his final night on stage in what would make for one hell of a autobiography.

But for now he has no plans to write it.

But telling his tale on stage instead of in a manuscript is the preferred method for Munk who noted that despite his popularity and overt niche following, “a book isn’t going to sell because if no one know who you are, no one is going to care about your story.”

However it was a no-brainer that this story needed to be told in some method.

“A couple of years ago when I started doing stuff with Second City [Comedy] in Chicago I had a conversation with the director of the first show I did,” Munk said during a conversation with PW. Except it wasn’t really a show and more statistics of my life. [After hearing it], he said to me ‘you gotta make that into a show.’” I thought about writing a book, I wanted to do it as a play, or a musical. But what I’ve learned is that as a one-man show, there’s a lot less pressure on making sure you deliver a compelling story. Plus, there’s an entire built-in audience that wants to hear a story. So you don’t have to worry about selling out every night, it’s all about putting on a really good show and people will talk about how good the show is.”

The first iteration although slightly different sold out in Washington, D.C.’s Woolly Mammoth Theater last year as both Munk and Second City enjoyed rave reviews. However, stripping this version of a cast makes it more real for Munk who notes a bit of vulnerability in choosing a solo act and choosing the First Person Arts Festival in an unveiling of the modified version.

“From a storytelling standpoint and a marketing standpoint, this was a better way to go,” said Munk. “What makes this more interesting to me is that as a stand-up I wasn’t initially a storytelling stand-up…but for me to tell stories and to do monologue, this is a different type of exposing [myself] for me. You have to be more honest when you’re doing monologues, you have to give it emotion that you sometimes fear. In the D.C. version, I was able to have a little cover with the performers, but with the show in Philly, it’s all me talking to me.”

But for those expecting Munk to lose a sliver of the beloved hilarity that grew to prominence with the national acclaim he received on Comedy Central’s short-lived The Nightly Show with Larry Wilmore, his Second City stints or his popular YouTube channel, Munk vows that none of it is going anywhere.

“For people who have only seen me do stand-up, they’ll get an example of where my mind is coming from and where the basis of my stand-up is coming from [in this show],” Munk said. See this show, see this version of me, you get a very vulnerable version. But this isn’t an hour of melancholy, it’s a little more stand-up added in and we’re taking some shortcuts on topics we belabored in the first version.

Black comics rarely do a lot of self-deprecation; there’s no theory as to why that is, but I know the way I grew up, and Black people in general — Black men specifically — didn’t show weakness or vulnerability publicly. I do and I think it’s important for people to see. I’m not hiding anything.”